We have a number of redundant monitoring systems at work that regularly execute processes. Some run every minute, some once a night depending on what they are doing. For example, we might execute a script that exports all customers who haven't made a purchase in 30 days to send them a coupon.

Rather than trying to keep track of all of these by hand, it's much easier to build jobs that are automatically scheduled and executed. On Unix-based systems, this is accomplished with Cron. For you folks that know what you're doing, feel free to educate me and the readers if I throw out any disinformation.

It's unfortunate, but the typical web developer isn't acquainted with Cron at all. Even if they are, web hosting companies often don't supply access to, or support of, Cron. My host is one of the latter – they allow you to use it, but they don't support it.

Cron is named for the Greek word Chronos, meaning time. Cron runs in a continuous loop to run tasks that are accumulated by Crontab (perhaps named for tabulator. Those tasks are typically referred to as Cronjobs, and can reference scripts in your site. 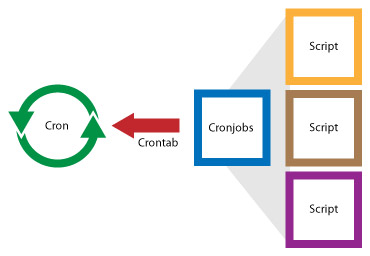 How do I setup the Crontab

Getting Cron to actually run can be challenging, so here's what I learned and how I did it for If Suck:

Syntax for your Cronjob File

With regard to #2 above, Cron utilizes an ingenious scheme for determining when your scripts will be executed. In fact, you can actually copy and paste this into your Cronfile (on my host, it's located in /var/spool/cron/ with the filename the same as my username).

The above will execute my script every minute. If I only wanted it to run once an hour, I would just put how many minutes after the hour that I wish it to run, so if it was at the 30 minute mark:

Be sure you set the permissions to this file as executable, too! I found that syntax, permissions, and executing crontab from the Terminal window were the most important factors. Each time I'd resave the file, I'd find my permissions needing reset as well!

UPDATE: If you'd like to ensure the jobs are running, one simply way is to update a database field with the last time the script was run. If it's more infrequent, you may just script an email sent to yourself.

How many jobs could you automate utilizing Cron?