One of the challenges with having an out-sourced or offshore development team is simply trying to track and prioritize your work. I work with no less than three outsourced resources, one of them offshore. It seems when you split the workday between time zones, you naturally introduce a delay to everything you do.

I got some press when I canceled Basecamp a year ago. The irony is that, when I signed on with my new job, I was back working in Basecamp again. I'm not knocking Basecamp, it's a worthy application. I just need something with more robust task and time management. I did then, and I'm finding I still do now. A discussion board with a simple to do list just doesn't cut it as a project management application.

I don't know if Sergei Podbereschi and Greg Roy (founders of 5PM Project Management software) ever used Basecamp, but they definitely experienced some of the same issues I find myself in today with their company, QG Software.

So – they put their heads together and developed 5PM. The application was, ironically, developed on two different continents across 5 different languages spoken by the (now) six employees.

After seeing a preview of 5PM, I contacted Sergei. Here's how 5PM came about:

It was developed as most of the project management solutions – out of need. It was back in 2003 when we started and it was nothing out there that we liked. So we started on our own and called it Project & Team Manager. In fact, that first version was initially developed by me, then we hired additional coders to extend it. 5pm grew from that initial product. It's all web20, but, as you can see, it's based on much older ideas. 5pm in fact was a total redesign. Everything changed – from the development platform and interface to the branding. We launched it in November 2007, as SaaS (previous version was downloadable).

I think it takes one look to see how it is different. We did not cut corners when designing the interface. We wanted everything within a click or two and the possibility to customize the interface. It even comes with a Flash Timeline (I don't know of any project management software that mixes AJAX and Flash together). 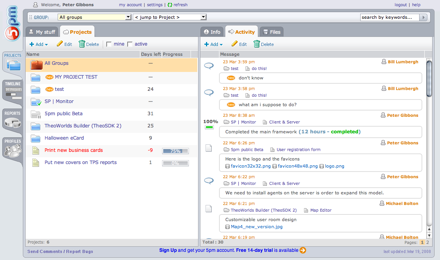 We have a bit different approach to the interface and features – we try to make it simple on the surface while packing a lot of power “under the hood”. Also, 5pm is a result of an interesting mix of visions – Greg is an IT manager with 15 years experience, while I'm a younger web designer and developer. Managers like detailed views and reports. Developers hate project management tools, basically. So we tried to design an interface where it's easy for team members to add messages or close a task with a single click (even through email), while managers have the power to dig deeper.

I also think that we will differentiate more as we add features, using the feedback from our clients. Expect big changes in our Timeline and Reports section in the next months.

I've requested our development partners review 5PM immediately. The team was taking a look at Jira, but the interface is honestly confusing the heck out of me. I'm hoping that I get a shot at using 5PM!

For you Office Space buffs out there, you'll also appreciate the demo. Enough said.