This morning, I unfollowed a brand on Facebook. Over the last year, their updates morphed into political attacks, and I no longer wished to see that negativity in my feed. For several years, I openly shared my political viewpoints. too. I watched as my following was transformed into more people that agreed with me while others who did not agree unfollowed and lost touch with me.

I witnessed companies I was courting move away from working with me, while other brands deepened their engagements with me. Knowing this, you may be surprised to know that I’ve shifted my thinking and strategy. Most of my published social interactions are now inspirational and industry-related rather than socially and politically packed. Why? Well, for a few reasons:

Respectful disagreement on social issues is dead on social media. Brands are now mobbed with vicious attacks and boycotted when any stance is revealed or even perceived by the public. Virtually any defense or debate quickly sinks to a holocaust comparison or other name-calling. But am I wrong? This data shows some insight that many consumers disagree and believe more brands should be authentic and publicly take on social issues.

The Havas Paris / Paris Retail Week Shopper Observer uncovered three trends that stood out in the changing the relationship between brands and French consumers:

Perhaps my opinion is different because I’m nearing my fifties. It seems to me that there’s a conflict in the data where only a third of the consumers want brands to get political despite virtually every social issue turning into a political football. I’m not so sure I want to patronize a brand that openly professes its stance on social issues. And what of a controversial social stance that splits the consumer base? I think the first statement may need to be rewritten:

Consumers believe it’s now the duty of a brand to take a stance on social issues… as long as the brand’s stance is in agreement with the consumer on how to improve society.

I have no problem with any company privately supporting social issues, but I can’t help but wonder if the push for brands to take a stance is going to be used to reward or punish them economically for their views. Most social issues are subjective, not objective. This doesn’t seem like progress to me – it seems like it’s bullying. I don’t want to be forced by my clients to take a stance, hire those who only agree with me, and serve only those that think the same as me.

I appreciate the diversity of opinion rather than group-think. I believe prospects, clients, and consumers still want and need a human touch rather than an automated one, and they want to be personally rewarded and recognized by those brands they spend their hard-earned dollars on.

So, is my taking a stance on this controversial? 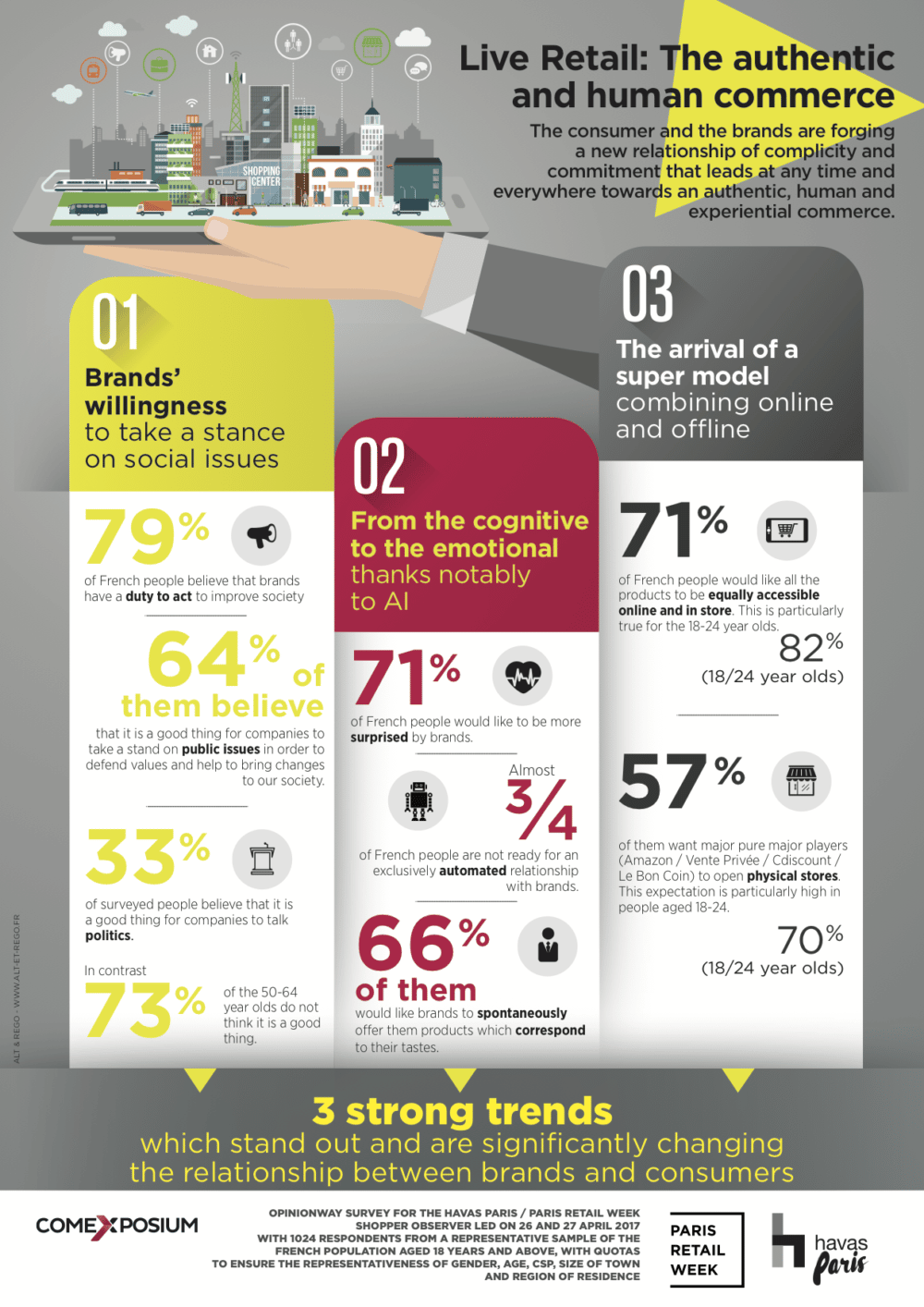 The Shopper Observer Study, Between AI and politics, the importance of the human factor for consumers, was conducted by Paris Retail Week in partnership with Havas Paris.