As we continued to work to increase traffic the last year, one of the areas we took a good look at was the time of day that we were publishing blog posts. A mistake that many people make is simply looking at their traffic by hour and utilizing that as a guide.

The problem is that viewing traffic by hour in your analytics only displays the traffic in your timezone, and not the zone of the viewer. When we broke out our traffic by time zone, we found that our most important spike in traffic was first thing in the morning. As a result, if we’re publishing at 9AM EST, we’re already late. If you’re site or blog is in the Central, Pacific or other time zones… you’ll want to schedule a post to hit at 7:30AM to 8AM EST to drive the most traffic and social sharing. 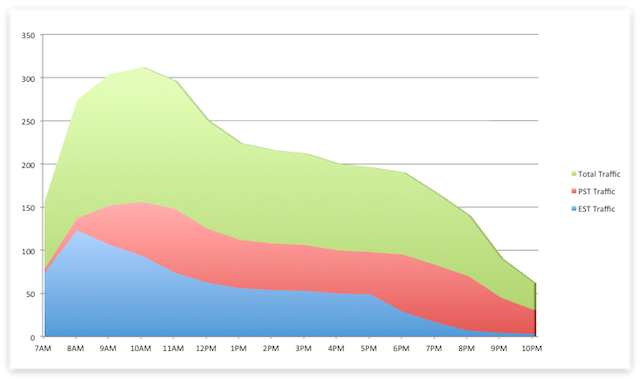 Likewise, as we look to publish a post in the afternoon, we need to ensure that we don’t do it after 5PM EST, or else many people won’t see the post until the next day. If we were going to publish 3 posts in a day, we’d want to publish them earlier rather than later to increase the exposure of our content. If you’re in the Pacific timezone, you’ll want to publish between 4:30AM PST and 2PM PST! So… you best learn how to schedule posts unless you want to lose some sleep!