I’ve been a modest user of Flickr and really haven’t done much with it. My main reason for using Flickr was the group feature that allowed me to make an I Choose Indy Group for the website I Choose Indy. Joining Groups is a key feature of any social networking site and all of them seem to be catching on and offering them.

My son graduated from High School a week ago (with a respectable 3.81 GPA, a small scholarship, and accepted into the Physics program at IUPUI). I took a handful of photos at the graduation, zipped them up and sent them to all our relatives. Immediately, I began to have problems… some folks got the file and couldn’t open it, for some it was corrupted, and some never received it at all. 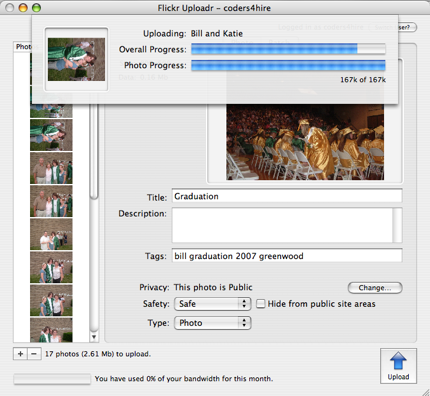 It worked amazingly well! My only complaint is that it didn’t display the pictures in the tool with the right orientation (they were uploaded with the right orientation, though) so I wasted some time trying to figure out what was going on. Once the images were uploaded, I made a set, and shared it with my family and friends (you can email up to 50 friends and family in a single shot)!