I’m sitting at the Automattic booth at Blog World Expo (siphoning power) and had a great conversation with the WordPress team regarding a number of projects we’ve worked on as well as discussing changes and challenges we’re running into with our clients. One of those concerns is security and backups.

It’s strange that I’ve been in the WordPress community for a while, but still hear about programs and applications that have been around for years and I’ve not seen them! One of those is VaultPress. VaultPress is a service you can add to your WordPress self-hosted blog that will both monitor the security of the blog as well as keep ongoing backups of the content.

Here’s a video overview of VaultPress:

Unlike other off-site backup services, VaultPress actually autosaves the off-site backup as you write… just like the autosave feature within the WordPress editor. Too cool!

Another great feature of VaultPress is that it monitors for any changes in your WordPress code installation. Again, the advantage of this is that the same Automattic family that’s developing on the WordPress platform is writing the monitoring platform that’s ensuring you’re safe. Malicious plugins or plugins with poor security are often a gateway for hackers to get in and push code to other pages within WordPress, making your site a gateway for evil-doers.

VaultPress is a paid service, but very affordable with plans that range from $15 to $350 per month (for enterprise). I was testing MyRepono but it was not a simple plugin to use – so I’ve switched to VaultPress! 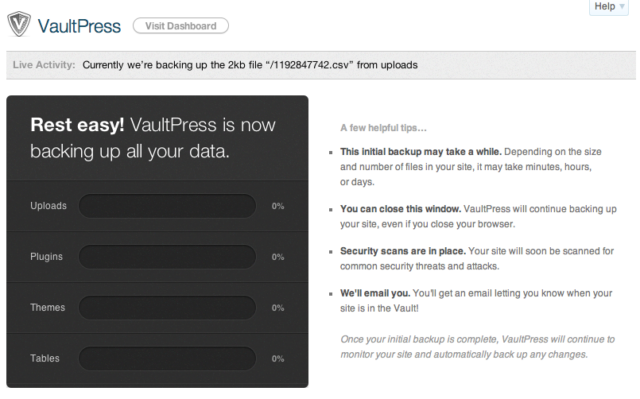